Time to Start Talking about Blockchain 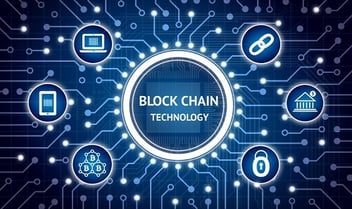 I remember the first time I undertook an EDI (Electronic Data Interchange) integration project.  It was 1999, I had recently changed the course of my post-Army career from a Novell Certified Network Engineer to programming.  I’m sitting in front of the Visual Basic 6.0 IDE, charged with writing something that would, via modem, transmit a series of EDI documents to an inland marine reinsurer.  These documents included their percentage of monthly premiums, as well as their percentages of claim payouts.

Until that point, my development work was usually standalone desktop applications interacting SQL databases.  The data stayed put, within the silo of the client requirement.  We could format it as we wanted; we could present it as we wanted since our only requirement was to make the data meaningful for users both in individual records and in report aggregation.

6 months into that EDI project, after wrangling over the modem interactions, the document format, finessing the disparities between how internal policy management and underwriting data was stored and how the reinsurer expected it, I was ready to go back to infrastructure and put programming in the rearview mirror.

Imagine my surprise two years ago, when I was again coding a transfer of premium and claims data to a reinsurer, using identical EDI formats, only doing it across FTP instead of the cumbersome dial-up.  Only the exchange via FTP as opposed to a specific dial-up channel distinguished projects separated by a decade and a half.

RKL eSolutions has significant experience in building EDI integrations for clients, but the reality for our customers is that supply chain process integration is a costly endeavor.  Add a myriad of partners, a plethora of suppliers or vendors, and our variegated systems, and to quote an old text adventure game, our job as integrators becomes helping clients navigate “a maze of twisty passages, all alike.”

This is true within the verticals we typically operate in and those we don’t.  We have a suite of tools that make it easier, like our Queue Manager, with the domain knowledge on the part of our team to back it up.  The integrations require a significant amount of collaboration, with a variety of interpretations of EDI, even if our expertise and toolbox can help mitigate those costs.

It’s not for nothing that all the business systems players, including Sage, are putting portions of their research and development budgets towards blockchain.

With the emergence of blockchain as the technology behind many cryptocurrencies, such as BitCoin, our industry has looked at the “everything old is new again” concept of a distributed ledger.

The best explanation I’ve seen appears in this article from CIO Magazine:

A blockchain is the structure of data that represents a financial ledger entry, or a record of a transaction. Each transaction is digitally signed to ensure its authenticity and that no one tampers with it, so the ledger itself and the existing transactions within it are assumed to be of high integrity.

The real magic comes, however, from these digital ledger entries being distributed among a deployment or infrastructure. These additional nodes and layers in the infrastructure serve the purpose of providing a consensus about the state of a transaction at any given second; they all have copies of the existing authenticated ledger distributed amongst them.

For supply chain operations, this peer-to-peer record of transactions creates a permanent history of product that doesn’t just exist in our usual amalgam of manufacturer, supplier, and sales systems silos.  From raw materials to sale, with blockchain, we don’t just have individual documents representing a step in the process flow, but rather we have the entire flow preserved.  You can marry physical goods to individual system serial numbers, bar codes, RFID, etc.

This is especially useful in processes that require higher levels of transparency, like aviation.

The technological advantages include:

There are disadvantages.  Some of these have materialized with the cryptocurrency market.  A large backlog of unconfirmed bitcoin transactions (note the total size of the blockchain, at the time I’m writing this 46005 KB) means hours before transactions are confirmed.  Emerging developments are improving this, of course.

There is a good chance it will be slower than interactions with a central database.  A blockchain has to accomplish all the same things that a database does with transactions:

Would we be recommending early adoption of the blockchain?  Absolutely not.  There are evangelists selling it, as happens with any emerging technology, but the benefits are, as of right now, burdened by some complexities, and for participants with a smaller margin in the supply chain, it’s a complete non-starter.

We cannot, however, ignore its potential as it continues to develop.  IBM, Sage, Oracle—many of the big names recognize blockchain’s possibilities, you should keep blockchain on your radar!

Have Questions or Need Help?

Click below to get in touch with us here at RKL eSolutions if you have questions about blockchain or how it could effect supply chain operations .
Ask a Question