If you use Sage 500’s O2 Process Manufacturing module, then you know RKL acquired O2 from EVS in early 2020. With a smooth transition completed, RKL is happy to be supporting customers and making minor modifications for ad-hoc requests. What you may not know, is that RKL has also been working on an 8.00.3 minor revision to support Sage 500 8.00.3 and potentially further minor updates, and we have included several fixes and enhancements that you may find useful in your everyday operations. I’ll go through a high level overview of those changes in this blog. The source version of issues is not mentioned, as we did not investigate each issue for the originating release.

As with the release, this blog was put together with the help of many team members.

The start and end dates of Labor and Clearing transactions dates are assign from the batch close process, but the dates are not validated against closed periods. This error makes the rest of the batch inaccessible via the screens

In some instances, a work order return of a material issue would not remove a pending inventory transaction. There would then be both a posted and a pending transaction for the return, resulting in double counting the inventory.

When entering production batches, the issue was present in the Estimated Cost portion in the selection of the cost code values; because it wasn't restricting by GL Account type it would also include non-financial accounts. However, the account type restriction was happening properly in the Actual Cost section. Not restricting the GL account type in the estimate caused three issues: First, some of the production batches GL Transactions weren't processing to GL, since the GL Integration excludes non-financial accounts. Second, AR Invoicing won't post because the item has costs in a non-financial account for COGS, which will cause invoice posting to error. Third, this caused differences in labor costs between actuals and estimates and caused it to update cost buckets that aren't used normally.

The material requirement for each BOM line will be duplicated by the number of BOMs in which it exists. This issue is just a duplication of display.

In multilevel production, if a Finished Good (FG) BOM item is being used in another formula at a lower level, the report was including that material in the BOM explosion on the Item BOM report and in costing. This was true even if these higher-level FG BOM items did not have a default formula specified. The report should not display any BOM items that don't have a default formula.

If you tried to delete a line in this .Net based screen, you would receive an error message. The ability to save a line also would sometimes produce an error as well. These both have been remedied.

We corrected several display issues with this form, including blank fields displaying cryptic code scripting fields, field labels obscuring the actual fields, such as the Period Summary Start Date and Cut-off Date labels, and partially hidden field names. These were just display issues, but when you can’t read data, that’s not a nice screen. A couple examples of the cosmetic fixes are shown below.

Some screen processes may result in arithmetic overflow if using small units of measure and large quantities. This has been seen in O2 Issue Material Finalization for example and Receipt of Goods posting

If a BOM is created with a given set of lines, and a Production batch is then created for that item/BOM, the order of lines in the production batch is not the same as in the BOM definition. A re-ordering of the BOM lines is occurring when the PN BOM Line Keys are being generated, causing the sequence to not match the intended sort order.

The form is not allowing the selection of the options for rolling up the formulas for an item. It will either use the Default Formula or Formula by Warehouse based on a company-level setting. This was changed to allow the flexibility of either in the report

Expand MRP Purchase Items from One Choice to Two

Just as Sage has done in the Sage 500 MRP Screen, the O2 MRP screen now also has the two check box choices for replenished purchase items and manually purchased items. 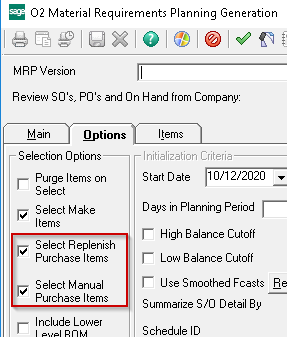 We hope that from the list above and any interactions you’ve had with the RKL team during these initial months that you’ve been our customers for O2 have shown you our commitment to you and to making O2 fit your business, enabling you to innovate and to complete your daily tasks with ease and efficiency.

Darrick has over thirty years of software development experience, most recently in business software, but also in banking, finance, healthcare and aerospace.